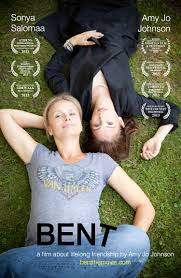 In lieu of Mighty Morphin’ Power Ranger’s 20th anniversary this year, Best of Baltimore blog had an exclusive interview with Amy Jo Johnson (Original Pink Power Ranger). Aside from Johnson having an illustrious music career, starring in “Felicity,” and in “Flashpoint,” Johnson is also an acclaimed director.

Her work behind “Bent” is now part of the official selection for the  2013 Long Island International Film Festival, Wine Country Film Festival as well as a slew of other notable premiers that showcase her work to her diverse fan-base across the nation (world).

(Here’s an exclusive interview with Amy Jo Johnson on her directorial debut with “Bent,” a short film about friendship, and about “Lines,”a mini film about not worrying about getting older.)

Amy Jo:  My new movie “Bent” was inspired by my feature script titled “Crazier Than You,” and in this film, the two little girls, from my previous script are all grown up. What’s also interesting to mention is that the characters are loosely based off my own life.

Sherryn: How was it like being a director? Will you plan on directing again?

Amy Jo: I LOVED it! This project was truly special to me, more so than my previous ones. In addition, I find directing to be a true place for me to express my voice and to paint special pictures that I want to share.

Sherryn: I heard some of your own songs are used in this film? Can you tell us which songs?

Amy Jo:  I used my song “GOD” at the end credits of “Bent.” And this single is prominently featured on my new album Never Broken which will come out late this Fall. The best place check it out is by visiting my website:amyjojohnson.com.

I definitely featured some of my favorite artists in this film. For instance, I used Cinjun Tate’s song “OVER,” in a scene. I do love that man’s voice.

Sherryn: Do you still play music? Any new albums come out?

Amy Jo:  As of now, my album Never Broken is being mixed. I’m so excited to share this CD with everyone!

Sherryn: So what exactly makes “Bent” a dramatic comedy?

Amy Jo:  In life, most experiences are easier to deal with when you combine it with humor.   For example, when my mother passed away, those past ten months were a time when I haven’t cried or laughed as heavily. So, probably every movie I ever write or direct will be a dramatic comedy. I believe it’s in my nature to combine these two elements into most of my projects.

Sherryn: Aside from being the first pink power ranger, you’ve had an illustrious and steady career in Hollywood? What else have you done?

Amy Jo:  Let’s say that I’ve been blessed to have had a non-stop working career as an actor from that fateful moment I drove my car into Hollywood, twenty years ago. I’m proud of what’ve I have accomplished but I also know how lucky I truly am.

Sherryn: Your fundraising campaign was successful! Can you let us know about the process? How was it like using Indiegogo?

Amy Jo: Using indiegogo was a MUST for both of my projects to be executed. Indiegogo  was mostly a great opportunity for people ,who believe in me and my career, to be a part of the project. I LOVED that!! This project was a team effort for sure!

Sherryn: Has “Bent” been picked up yet? Do you know how fans can watch it?

Amy Jo: Initially, both “Bent” and “Lines” will do the festival route. In the near future, we will find a home for them on my YOUTUBE channel so fans can watch it easily. Because they are short films, I won’t be chasing down major distribution. I also want them to be accessible to anyone who wants to watch them.

Sherryn: You also have a strong online following? Were you able to use social media to enforce and promote your recent project?

Amy Jo: Yes. Social media is the ONLY way I could have had a successful indiegogo campaign.

Sherryn: Aside from “Bent” do you have any other projects in the works?

Amy Jo: Yes, my short film LINES! I just finished shooting it a few weeks ago!  I also raised enough funds through Indiegogo to finance the film too. It’s basically a film about embracing our wrinkles as we get older. I  do LOVE this little piece and am VERY excited to share it with the world!

Sherryn: Anything else we should know about Bent? Why should we all watch it?

Amy Jo:  Everyone should watch it because it’s a story about life- long friendships and about feeling normal.

Amy Jo: My fans can check my website here:_amyjojohnson.com, follow my updates on Facebook:https://www.facebook.com/atothedoublej?ref=tn_tnmn and watch my short films, and acoustic guitar performance on my youtube page: http://www.youtube.com/channel/UCFxfa3EuLCSA7_zUzWtBkOw