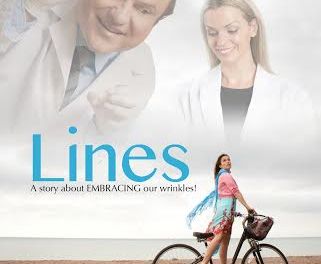 Amy Jo Johnson, our favorite renaissance woman, has developed a new short film through Indiegogo. Lines, a comedy about the pressures in society to STAY looking young, will not only tug at your heart strings (like it did with mine) but it will inspire you to look at yourself through a fresher lens—instead of the one manufactured by the media.

Johnson, well known for playing the Original Pink Power Ranger in Mighty Morphin Power Rangers, Julie Emerick in Felicity, and Jules Callaghan in Flashpoint, shifted her acting hat for a director one.  Her second foray into film-making has created buzz across the inter-webs!

Johnson’s first foray into film-making, Bent, was also  selected to screen at the 2013 Women’s International Film and Arts Festival and also won the audience choice award in the 2013 Women in Film and Television-Toronto Short Film Showcase.

Indiegogo, Johnson’s go-to platform for fundraising, helped her raise funds to write, produce, star and direct in this delectable film. Fans who contributed to the film were awarded personal signatures, signed copies of Johnson’s newest album Never Broken —which came out this November and is highly lauded as being AMAZING by critics and bloggers alike—, as well as having the title of “Executive Producer” on her film. Lucky fans!

Anyways, I was awarded an exclusive viewing of Lines,  for Best of Baltimore Blog, in the lovely confines of my own home. Before viewing this film, and based on reading the synopsis on Johnson’s Indiegogo page, I falsely assumed that this film was going to be a maudlin story on getting wrinkles–hence the title Lines—but I was beyond wrong. This unearthly film tackles aging and vanity with incisive humor, methodical imagery, and powerful metaphors. Johnson’s adept skills as a director, writer and actress are spot on with this film.

Did you know, Johnson’s second film is based on a true story that happened to her last summer? When the enigmatic actress, director, produce, writer and musician  went to the dermatologist’s office to remove a mole from her inner thigh, she was accosted by a youth obsessed doctor. This pivotal event left an indelible mark with her and also inspired her to create a humorous film that embodied the horror and humor over aging.

Amy Jo Johnson’s second film racked me with a plethora of emotions. I couldn’t stop laughing, crying, and feeling so many hidden emotions in a short amount of time.  It was so good that I watched it thrice over because the film’s message deeply resonated with me– Lest not forget that I did shed several tears by the end of the film.  Though I am not in my 40′s, like lead protagonist  Amelia (beautifully played by the ever so talented Amy Jo Johnson),  I’ve also faced issues with aging such as gray hairs (2 strands), extra weight gain, and dealing with strangers calling me ma’m instead of miss. Oh, the trials and tribulations of facing your mid-twenties!

This film, a sumptuous feast of: iconic beach scenery, rich banter between Amelia (Amy Jo Johnson) and her doctor (Enrico Colantoni, from Flashpoint & Veronica Mars), and painful scenes of women trying to defy their own wrinkles with botox, is a singular jewel amidst an ocean of blockbusters, and post-ironic indie films.

When it comes to Johnson’s directorial skills, she artfully films a paradox of her character Amelia biking freely down the beach  in the beginning of the film to biking back dejectedly to her home towards the end of the film. She was also able to capture Amelia’s hodge-podge of mixed feelings without having her character utter much towards the end. In short, the film digs deep into the protagonists insecurities about growing older and over how outside forces (namely the doctor and his assistant) can whittle away at ones already strong sense of self.

The office where Amelia had to get her mole removed was a cavern of mournful pictures, sterilized decor, and painfully fake doctors who clearly want to ransack Amelia’s wallets for a mad amount of cash. When the doctor made jabs at Amelia for her lines on her face, you basically feel what the character feels. The dialogue in the film was heart-crushingly close to real life that it’s hard NOT to relate to it since real life is just teeming with fair-weather comments made by strangers, friends and co-workers.

I had a really hard time picking favorite scenes from this short film since each scene was a superlative of what women go through when it comes to aging. When women age, advertisements, peer pressure, and the media concentrate all of their might into making ladies (OF ALL AGES) feel inadequate when they grow wrinkles (lines), gain weight, and lose the elasticity of their skin.

However, the surprise element at the end is designated as my favorite scene of all time since it was unpredictable, and beautifully shot. As you should know, I will not ruin this lovely gem by revealing the end. You have to watch it from beginning to end to understand how the end underscores the rest of the film in a positive light. In addendum, when it comes to creating short films, Johnson has an eye for design, meaningful dialogue and for creating stories that imbue a rainbow of raw emotions in a humorous yet subtle way.

Lines, in a nutshell, is a panacea for all women who aren’t able to embrace getting older. It’s  also a plenitude of realism, humor, and wonderment that will leave the viewer looking at themselves in a whole other light. Hello to happier moments between you and the bathroom mirror!

I, personally, recommend this film to all woman, young and old. The overall message from this film is to love yourself, deeply, and to embrace your wrinkles. Lets start spreading self-love now by passing this film to daughters, mothers, grandmothers, friends and to all who have been internally tortured by the media’s false imagery on what inner/outer beauty should be. I love this film beyond words and wished I watched it when I was in my early teens—when I was most insecure about my body image. This film is highly lauded by Best of Baltimore Blog as  ONE OF THE BEST FILMS EVER MADE FOR WOMEN!