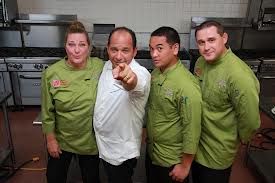 Normally, I don’t watch reality TV shows since I feel like they rot my brain worse than candy, but All Mixed Up  taught me ALOT about the food industry. In short, this Lifetime reality cooking show is a perfect blend of humor, spontaneity and culinary intrigue and I can attest to this since I watched all four seasons!  I was literally addicted to each episode, it was sooo good!

Ralph Pagano, Chef and host extraordinaire, is a dynamic coach that challenges each contestants to all sorts of zany contests. For example, on the fourth season, he quizzed contestant Seth Anderson on knowing five types of potatoes, and also, simultaneously, slashed time on a whim to all contestants (for no apparent reason). In a nutshell, this show is about  beginner chefs competing with each other to invent these unique recipes given ingredients from highly sought after sponsors such as Domino Sugar, Zaycon Foods, Mariani, while, at the same time, dealing with singular challenges from Chef Ralph Pagano that could ultimately determine if contestants could win $2,000 by the end of the season.

The challenges, cat fights between contestants, and critiques from laudable judges such as Dee Lennox, Michael Conrad, and Rosie Cox  make this show a must see event! I learned so much about cooking, food preparation, and about time management within a 30 minute time frame. That’s a lot to say coming from a specialist in the gourmet food industry (me).

My favorite season was fourth season since we see winners from previous seasons selected to duke it out with each other. The fourth season emanates so much feisty drama that you want to eat it up with a spoon! After finishing up the fourth season, I swear it was like watching “Survivor” minus any strange island behavior.  The fourth season of All Mixed Up pitted contestants Emman Eugenio, Cameron Bevan, and Seth Anderson against each other into grueling 30 minute matches where they had to concoct appetizers, entrees and desserts that would entice their judge’s fickle taste buds.

When I watched the first episode of season 4, I was instantly drawn to Emman Eugenio’s character since he never exuded ignorant bravado and was, simply, a  gentleman throughout the season. He had quiet confidence and that spread to his diverse Asian-inspired dishes that looked beyond delicious! I was totally craving his mochi and coconut ice cream recipe during the dessert episode! I can safely assume that Cameron Bevan must have been a fan favorite since he had steely-eyed determination to annihilate his opponents with his ornate cooking skills.  Even towards the end of fourth season, I felt empathy towards Seth Anderson for not making up-to-par dishes for his judges—-even though his beignets and chocolate coated bacon dessert looked really delicious.

In some ways, this show is a psychological experiment since it shows viewers what happens to seemingly good, hardworking people when you throw a bunch of obstacles down their way and expect them  to be the best of the best. I simply love this unique concept since i’ve never seen a cooking show like it before.

What differentiates this cooking show from its opponents is the zany challenges thrown their way such as wearing goofy eye goggles while preparing a dish. I  wholeheartedly give this show two thumbs up and highly recommend you watch it if you love food, drama, and LOL-moments!