I’ve been a Mo Collins fan  since her early days on MADtv, when she played Lorraine the lady who emits nasty, ear-screeching grunts. Collins talent for playing unique characters, such as Lorraine, has captivated millions of Americans and has secured her, as a top-notch actress for years to come.

Not only is Mo Collins a versatile actress but she’s also a talented painter. The woman has smarts! She’s been painting since she was a little girl and can create inimitable works of art. I can imagine some of her oil and acrylic paintings adding more flair to a D.C restaurant, home and even a psychologist’s office. It speaks volumes once you take a deep gander at it.

In between Collins uber busy schedule, she was able to find precious time for an exclusive interview with Sherryn Daniel’s blog and with Best of Baltimore blog about her roles on MADtv/Parks and Recreation and as a prolific artist.

Q & A with Mo Collins

Sherryn: What got you into MADtv? Did you always know you wanted to get into comedy?

Mo:I built up my sketch and Improv skills back in Minnesota, so when I moved to Los Angeles and the opportunity to audition for Mad Tv came up I was ready.  It’s exactly what I wanted to be doing. I didn’t know I wanted to go into comedy until I was about 20 years old.  Thats when I started to take it seriously.

Sherryn: What inspired your “Lorraine” character on MAD tv?

Mo: Lorraine is an amalgamation of a variety of women that live in Minnesota.  My home state.

Mo: I did so many impersonations on Mad tv!! I can’t remember them all.  It was a big part of our job being on a show that parodied pop culture.  Some of my favorites include Cher, Shakira, Barbara Bush and Jenny Jones.  Impressions were really challenging and fun.  I had never done them prior to Mad.

Sherryn: Do you keep in touch with anyone from MAD tv? If so, who?

Mo: Every now and then I run into my Mad family members and it is SUCH a treat.  I don’t see them nearly enough.

Sherryn: On Parks and Recreation, you play Joan Calamazzo. How is it like playing this character? What’s your favorite aspect about the show and the cast?

Mo: Joan is a blast.  Parks and Rec is such a fun environment to work in.  It’s all about the comedy there, and letting everyone shine! Amy Poehler is a wonderful Captain on this ship. 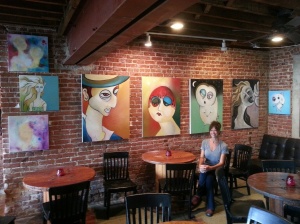 Sherryn: When did you start getting into art? Do you use oils, acrylic, etc?

Mo: I started doing art when I was a little girl.  I grew up wanting to be an artist. I have come and gone from it over the years, while comedy took over most of my time.  I work primarily in oils.  I also, occasionally use acrylic.

Sherryn: What is your most notable pieces of work?

Mo: I would say my most notable painting at this point would be “The Committee”. There is a whole lot of ME in there.  It took a long time for this canvas to find it’s way to completion. It is all about those voices in our head and dreams that try to guide us; both good and bad and everything inbetween. 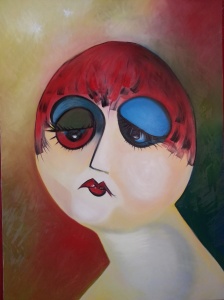 Sherryn: Do you generally have art shows? If so, tell us more about them?

Mo: I have only done one show to date.  It was a group show with other comics who are also painters.  At the opening we each did 10 minutes of stand-up in the gallery.  It was cool. I want to do more shows!

Sherryn: What generally inspires your artwork? What do you usually like to paint? Have any of your works of art been based on people you knew?

Mo: Anything can inspire my work.  Mostly people.  I tend to do a lot of “Heads” as I call them. Some are based on real people, yes.

Sherryn: Can you tell us more about your art background? Were you self-taught?

Mo: Began drawing and painting when I was very young.  Took art classes along the way, but primarily self-taught.  I’m still learning.

Sherryn: Where can fans (like myself) buy your artwork?  Will you ever have an art show in the D

Mo: I post available works on my website www.MoCollinsArt.com. I will never say never to a show ANYWHERE! HAHA

Mo: I have a Face Book fanpage and my twitter is @TheMoCollins.  Come say Hello!