Last weekend, was..AWESOME. My closest girlfriends and I hung out with my favorite Nickelodean actor, Kel Mitchell at the Black College Expo in Bowie University. Before this wondrous day, I watched old “All That,” “Good Burger,” and “Kenan and Kel” clips to prepare. I honestly had no reason to prepare. We were simply going to hang out with him for a little bit but the “pre-teen” in me was  nerding out before the big day.

Bowie University is a large campus. It’s so easy to get lost but we somehow found our way. Kel and his lovely wife, celeb-shade designer Asia Lee, were ensconced by notable HBC universities. Kel was often beset with kids, pre-teens, and adults who were just as excited as we were to meet him. 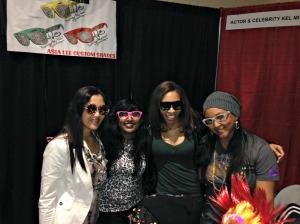 Although we were super excited to meet Kel, our initial attentions gravitated towards Asia Lee’s unique shades

. Chardae loved the ones with gold spikes aligned on the sides and since I was wearing a leopard print shirt, I was all about the pink shades. Sion had stars in her eyes and latched on to the opulent pink shades that framed her face and highlighted her blazer-suit-ensemble nicely. Naturally, we had to buy a couple pairs.

We heart the fact that Asia Lee is a female entrepreneur who not only started her own business from scratch but makes inimical shades at an affordable rate. For $10.00, you can feel like a celebrity in a Lady Gaga or a Beyonce music video. Cool, huh!

Roar! I’m fierce in these shades

Since I am deeply brown, no one could see me blush crimson red. I was initially nervous when it came to meeting Kel, since he is my ALL-TIME favorite Nickelodean actor, but after getting to know him, I feel like he’s an old friend. He’s humble, kind, down-to-earth and so easy to converse with. Sion and Chardae had a wonderful time chatting with him about his new movie opening up later this year where he plays a corrupt politician. It will open up nation-wide and I highly recommend you watch it.

As I said before, I “nerded it out,” the previous night, by watching copious amounts of Kel’s skits. My favorite skit of all times is of him declaring his love for orange soda. I shyly asked him if he could act it out again. He was so sweet, he said I can act it out with him.

I squealed like a little middle schooler at this opportunity.

Sion offered to film this interaction for my blog, which is a first. I never acted in a skit with a celebrity I hearted before! After four failed attempts, we got it down. Kel was very patient, of course, but it was a surreal experience to say the least.

Overall, meeting Kel was a wonderful experience. He’s a genuine person who keeps it real and does it all for the kids. Plus, his wife Asia Lee makes AMAZING shades